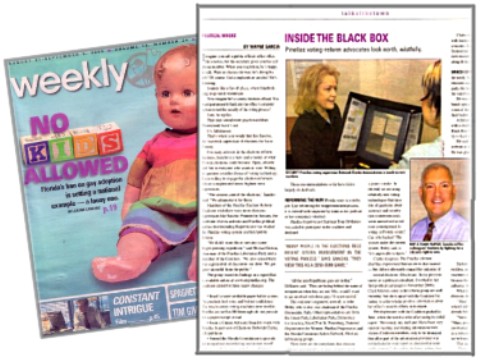 Inside the Black Box

Imagine you call a public official at his office. He's not in, but his secretary gives you his cell phone number. When you reach him, he's happy to talk. Want to discuss the way he's doing his job? Of course. Got complaints or an idea? He's listening.

Sounds like a far-off place, where bluebirds sing atop candy mountains.

Now imagine he's a county elections official. You want permission to hack into his office's computer system to test the security of the voting process?

Sure, he replies. That may sound more psych ward than Disneyland, but it's not.

That's where you would find Ion Sancho, the maverick supervisor of elections for Leon County.

For many activists in the elections reform business, Sancho is a hero and a model of what Florida elections could become. Open, reliable and fair to everyone who wants to vote. Willing to question even his choice of voting technology. Even willing to engage the election reformers whose conspiratorial tones frighten most supervisors.

"The citizens control the elections," Sancho said. "We administer it for them."

Members of the Pinellas Election Reform Coalition wish there were more elections supervisors like Sancho. Founded in January, the coalition of civic activists and Pinellas political parties (not including Republicans) has studied the Pinellas voting system and held public forums.

"We didn't want this to turn into some finger-pointing expedition," said Michael Gilson, chairman of the Pinellas Libertarian Party and a member of the Coalition. "We also sensed there was a great deal of discontent out there. We got quite an earful from the public."

The group issued its findings in a report that is available online at www.ercpinellas.org

Advocates say instant runoffs would cut down on negative campaigning and boost issue-oriented discussion, since candidates who attack strongly would not be likely to receive those secondary runoff votes.

Those recommendations so far have fallen largely on deaf ears.

Reforming the way Florida votes is a tricky job. Like reforming the reapportionment process, it is viewed with suspicion by some as too partisan or too conspiracy-oriented.

Pinellas Republican Chairman Tony DiMatteo was asked to participate in the coalition and declined.

"All the anti-Republican guys are in that," DiMatteo said. "They are hiding behind the name of nonpartisan when they are not. Why would I want to get involved with those guys? I'm not neutral."

The coalition's organizer, after all, is Arlin Briley, who is also vice chairman of the Pinellas Democratic Party. Other representatives are from the Green Party, Libertarian Party, Democracy for America, NAACP of St. Petersburg, National Organization for Women, Pinellas Progressives and the Florida Consumer Action Network. Most are left-leaning groups.

Then there are the complaints that election reform is populated by strange computer geeks who draw conspiracy lines that stretch from Florida's disputed 2000 presidential election to somewhere near the grassy knoll in Dealey Plaza. There is no doubt that some of the tech conjectures argued by elections reformers are tough to swallow.

But if you get beyond all that, this group has a point to make. In the end, we are using relatively new voting technologies that raise lots of questions about accuracy and security (not to mention cost), some unresolved or not even contemplated. Is voting in Florida secure? Can it be hacked? The answer under the current system, Briley said, is "it's impossible to know."

Clarke disagrees. The Pinellas election chief has experienced human errors that marred - but did not ultimately impact the outcome of - several elections. (Disclosure: In my previous career as a political consultant, I worked in her first political campaign in November 2000.) Clark believes some in the reform group are well-meaning, but she is upset with the Coalition for failing to acknowledge positive information about her office's security efforts in its report.

Her displeasure with the Coalition peaked in June, when she sent it a letter after seeing its initial report. "Previously, my staff and I have been very open in meeting and sharing information with various Coalition members, only to be dismayed that all or part of the information provided was not included in your report or discussed at your public forums," she said in the letter, adding that she would communicate only in writing with the Coalition in the future.

Clarke said she doesn't oppose a paper trail for her touch screen machine per se, but points out that the state has not certified any system for that and all of the options she has seen proposed by elections reformers are deeply flawed themselves.

Clarke also points to her willingness to meet with leaders from other parties to go over voting concerns. She meets regularly with Pinellas Democratic Chairwoman Carrie Wadlinger, and even recently agreed to allow Wadlinger to bring along Briley to future meetings.

Which brings us back to her colleague to the north, Sancho. He is a strange cat for Florida elections supervisors. He is not registered in any party. He holds a law degree. He never worked in the supervisor's office before running in 1988.

He was the first in the state to install a precinct-based optical scanning voting system that alerts voters if they vote improperly, allowing them to fix their ballots. It leaves a paper trail, too.

A British reporter called him earlier this year with a challenge:

Would he allow experts from Black Box Voting.org, based in Renton, Wash., to try to hack into his system as a test?

He said yes. And the results (posted on his website at www.leonfl.org/elect) surprised him. He was glad to learn that the two experts could not hack into his system from outside the office. But when he gave them access to the most sensitive parts of his operation (a notion that some elections expert scoff at as unrealistic), he discovered he was less secure than he thought. Using the simple Microsoft Windows-based Notepad program, Black Box Voting.org was able to change the results of an election he administered for a public school. Those elections reformers also showed how the individual memory cards on each optical scanning voting machine - manufactured by Diebold - could be reprogrammed without leaving a trace.

Diebold's reaction? Its lawyer called Sancho reckless, and said allowing outsiders access to their machines was "very foolish and irresponsible" because the hackers could have left bugs behind to influence future elections.

What did Florida's other 66 supervisors of elections think of Sancho's actions?

" I had a mixed reception from my brethren when I did this test," he said, adding that some already believed he was "not a team player."

"Some of them view me as a traitor," he said. "Many people in the elections field resent citizen involvement in the voting process. They view this as a zero-sum game. If the other side is winning, we're losing."

"There is no other side," he said. "Those are American citizens concerned about the efficacy of the voting process. How is that the enemy?"

Reply play solitaire online
4:22 AM on September 9, 2010
Thanks for sharing this link, but unfortunately it seems to be down... Does anybody have a mirror or another source? Please answer to my post if you do!

I would appreciate if a staff member here at www.pinellaslibertarianactivistclub.com could post it.